How to know you have Normal or Abnormal Anxiety? 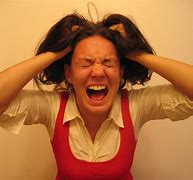 That stress is completely normal, and really—probably useful in certain situations since it can make you more alert and careful. After the presentation’s over you feel the stress start to fade away, right?.

Well…for 3% of the population, the stress doesn’t go away, and maybe that stress isn’t even brought on by a specific event and is always just sort of always there. Either way, at this point it’s considered to be anxiety.

That anxiety might even get worse over time, and causes things like chest pains or nightmares. Sometimes the anxiety’s so severe that it causes someone to be anxious about leaving the house or doing everyday things, like going to work or school.

This anxiety may be a sign of Generalized Anxiety Disorder, sometimes shortened to GAD. GAD’s characterized by excessive, persistent, and unreasonable anxiety about everyday things, like money, family, work, and relationships; even sometimes the thought of getting through the day causes anxiety.

If the anxiety’s persistent, then it doesn’t seem to go away, if it’s excessive, it’s usually more than someone else might feel, and if it’s unreasonable, they probably shouldn’t have a reason to feel anxious about it.

People who have GAD might even understand that their anxieties are excessive and unreasonable, but they feel it’s out of their control and don’t quite know how to stop it. People with severe GAD might be completely debilitated and have trouble with the simplest daily activities, or they might be only mildly affected and be able to function socially and hold down a job.

Sometimes the feelings might worsen or improve over time. In addition to having feelings of worries and anxiety, other symptoms include edginess and restlessness, difficulty concentrating or feeling like the mind just goes blank, and also irritability.

These psychological symptoms can also lead to physical manifestations of symptoms like digestive problems from eating more or eating less. They might also have muscle aches and soreness from carrying tension in their muscles.

Finally difficulty sleeping is a really common symptom that can have a serious impact on physical well-being, since the body’s not resting and can lead to issues of chronic fatigue.

Although the decision that someone’s worry is excessive and unreasonable has a subjective quality, diagnosing GAD is aided by the diagnostic and statistical manual of mental disorders, or DSM-V, this manual gives a list of criteria to meet in order to be diagnosed with GAD.

First, the excessive worry and anxiety has to have been present for more days than not over the course of 6 months. In other words, a person should have the symptoms of excess or unreasonable worry on 90 or more days out of 180 days.

Generally, people can’t quantify or track their feelings in that way, so again, this is meant to offer a general guideline, right? Okay second—the person finds it hard to control their anxiety, meaning that they have a hard time calming themselves or “self-soothing” to help themselves regain control over their feelings. Third, an adult must have three or more of the symptoms listed previously.

In children though, typically defined as “school-age”, so between 6 and 18 years old, only one symptom is needed for the diagnosis of GAD. Another criteria is that the anxiety causes impairment in important daily activities like school or work. For example, they might miss deadlines or find it difficult to even go to work because of their symptoms.

Fifth, the symptoms are not attributable to the physiologic effects of a drugs or medication, or due to a medical condition like hyperthyroidism which creates an excess of thyroid hormone, which can sometimes cause symptoms of anxiety and worry.

Finally, their anxiety isn’t better explained by another mental disorder like social phobia or panic disorder. Just like a lot of mental disorders, it’s unclear exactly why some individuals develop generalized anxiety disorder, but it’s thought to be a combination of genetic and environmental factors, as it seems to run in families.

It also has been shown to be twice as prevalent in females than in males. Treating GAD, like many mental disorders, may involve psychotherapy, medication, or a combination of the two. If it’s psychotherapy, cognitive behavior therapy has been effective since it teaches the patient to think and behave in different ways, and react differently to situations that would usually causes anxiety and worry.

One thought on “How to know you have Normal or Abnormal Anxiety?”

Diabetes Tips That Everyone Should Check Out

Get The Health Insurance You Need Without A Hassle

Everything You Should Know About Skin Care